Share All sharing options for: Edgar Renteria and the Case of the Overly Sensitive World Series Hero

You do it too. If you get a $200 holiday bonus from your boss, and if the crayon-chewing clock-watcher from the cubicle next to you gets a $400 holiday bonus, you’d probably be ticked. Really ticked. Disrespected, even. But in some countries, 200 American dollars is a substantial sum. It could probably buy a home in parts of Africa, South America, or Michigan. And there you are, complaining that your boss gave you -- gave you! -- $200, even though he wasn’t obligated to give you a cent over your salary.

When someone tells it to you like that, well, you gain a little perspective, and you might feel a little silly for complaining, but then you look across the cubicle farm. You see the guy who got the bigger bonus rip out his flash drive without unmounting it. Without unmounting it! That guy got a bigger bonus? That guy gets paid more? The blood starts to boil again. If you need more to be outraged, your co-worker can stick the flash drive in his nose and say "Duuuuuhhhh" in your scenario.

What’s the baseball equivalent of a player with a flash drive in his nose? 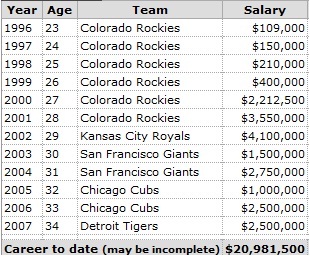 Neifi Perez didn’t win a World Series for the Cubs. Nope. What Neifi Perez did do was snap some pictures of a drunken Jim Hendry going to the bathroom in a Toys for Tots donation box, which led to a two-year, $5M deal from the Cubs. Then, miraculously, the Cubs were actually able to trade him the following year. He wasn’t just traded for any player, either -- he was traded for the lead singer of The Black Crowes. It was one of the most lopsided deals in baseball history. Perez then hit for a .470 OPS in 141 at-bats for the Tigers. While making $2.5M.

That’s what Edgar Renteria thinks about when the Giants offer him $1M to sit on the bench. Maybe not that exact scenario, but he’s just thinking within the bubble of the baseball world. He chose his words poorly. He was a Brooks Conrad away from being remembered in San Francisco only as an $18M mummy. But it’s not unreasonable for Renteria to think, "Wait, I’m worth more than $1M, dang it. I’m a World Series hero. I can still play, I know I can. Teams pay $1M for complete scrubs. That description does not describe me, no sir."

It’s unfortunate that he whined publicly. I don’t blame him for being offended, though. It’s easy for us to complain that he plays a kid’s game for millions and suggest that he should just shut his yap, but players are paid to add value to a franchise. Owners don’t think of teams as shiny model train sets, paying players like they’re rare Lionel cars just for the hell of it. Players are paid with the idea that they’ll excite the fanbase and/or help their team win, which would lead to increased revenue. When a player is underpaid, the money doesn’t go to sick orphans; it goes back to the owners. If I felt that I was underpaid in that scenario, it would tick me off, kid’s game or no.

I also don’t blame the Giants for lowballing Renteria. They need a backup shortstop, but they have a full roster, too. The difference between Renteria and Mike Fontenot faking shortstop for a couple dozen games might be worth $1M. It might not be. The Giants are being pragmatic, not nostalgic. No one's wrong. Renteria was just vocal when he didn't need to be.

In conclusion, it isn’t March yet. That's the real tragedy. Winter is lame.