It might get lost after the bullpen meltdown, but at one point, Game Two was destined to be a complete caining. After watching 170 or so Cain starts, it isn’t hard to recognize the familiar rhythm: two teams doing their best not to score, with Giants eventually overwhelming their opponents with not-scoring experience. So, so familiar. It’s how someone as good as Cain can have a .479 winning percentage over his career. So forgive the jaded Giants fan if he or she thought the story sounded familiar. I’d already planned the post-game write-up: it would have been a simple link. 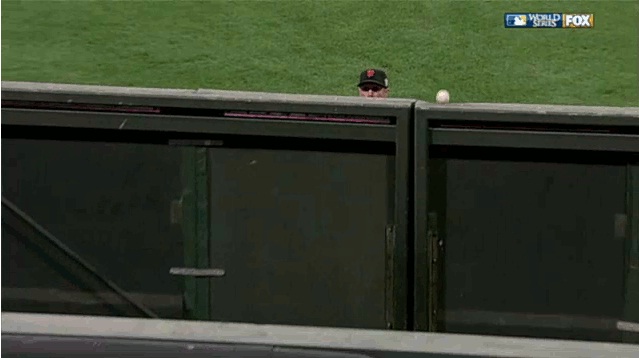 If the old rules applied, that would have been a home run. It would have been the deciding run. The old rules are useless right now. It’s magnificent, and it’s freaky. In the NLDS and the NLCS, the old rules didn’t apply. Two games into the World Series, and we’re in a Lewis Carroll afterworld. It must be our unbirthday. Edgar Renteria is a power threat. Home run balls turn into doubles that hang out at second until the inning is over. Freaky, freaky, freaky.

With a one-run lead, maybe the Giants start to press. Maybe there are botched hit-and-runs. Maybe Cain starts to do damage control, walking a couple of hitters in front of Josh Hamilton and trying to be too fine. I’m a big believer in the chaos theory of baseball. One weird thing leads to an expected thing that leads to an unexpected thing that leads to something mind-blowing that would have never happened if not for that one weird thing.

I can just feel the abyss staring back when I stare at that picture. And then the feeling passes. Consider these Starkish tidbits, some of which I might have nicked from Stark’s Twitter feed:

Yet, it’s not done. Not even close. Vegas puts the Giants at somewhere between 70% and 80% favorites to win the Series. Back in the day, the Giants were once 97% favorites to win the World Series. Don’t like the link? Tough. I can visualize all of the different ways the Giants can win this. I look at what it would take for the Rangers to win and what it would take for the Giants to win, and I’d much rather be a Giants fan right now. But the Rangers winning four out of five would be far, far, far less bizarre than the Giants scoring 20 runs in the first two games of the World Series. Enjoy the win, but, dammit, this is baseball. And it’s weird.

Two more. Two more. That’s not a small task, but it’s doable. And that’s weird. The Giants are some sloppy .400 ball away from doing something crazy.