Last night’s game was like a Robert Altman movie, a James Joyce novel, or an episode of "Real World/Road Rules Challenge" – there were dozens of story lines to follow, and if you wanted to take the time to dissect any of them, you could. Posey doing more wonderful things. Torres rising from the ashes. Romo not melting into a puddle of inexperienced playoff goo after giving up a big hit. Uribe’s painful at-bat in the ninth.

Travel back in time to March with an index card that has Pablo’s slash line for the season – .268/.323/.409 – and ask a Giants fan how the team will do in 2010. Don’t even bring up the miserable numbers with runners in scoring position or the near-record double play rate. Pablo Sandoval was one of the only players Giants fans could feel sure about this season. Whoops. And while you’re back in time, give me a call and tell me to do something more productive than watch "Lost" every week. Could have been learning Spanish or something, dammit.

So last night’s two-run double from Sandoval was pure catharsis. It was the moment everyone wished for, but no one expected. The sight of a jolly, mirthful Panda on second base, clapping his frustrations away, is the indelible image of this postseason so far for me.

Here’s how the at-bat really went: 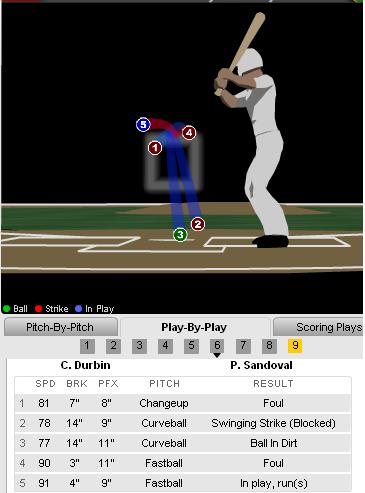 A foul followed by a swing at a pitch at his shoe tops. It was a rerun of an at-bat we’d watched hundreds of times this season. To Pablo’s credit, he laid off the second curve in the dirt. Then the Phillies pitched to the 2010 scouting report: fastballs up. That wasn’t the 2009 scouting report; I don’t remember Pablo having a problem with Marvin Benard specials in 2009. But this year, Pablo has consistently flailed at fastballs above the strike zone. The pitch he sent into the gap was exactly the pitch that Chad Durbin should have thrown.

There are two ways to look at this. The first is that Pablo just got lucky. He swung at a pitch out of the strike zone that he had no business swinging at, and he was fortunate not to wave through it like he has so often this season.

The dreamer in me, though, remembers what the good Pablo Sandoval was like. That player could take an outside fastball at the letters and put a crazy, level, and powerful swing on it to drive it to the opposite field. The pitcher would get frustrated and steam on the mound, wondering just how in the heck he was supposed to pitch Sandoval. Sandoval would silently giggle as he pulled into second or rounded the bases. The dreamer in me thinks that Sandoval’s problem isn’t that he swings at everything, it’s that, for whatever reason, he isn’t making hard contact with those wild swings.

The dreamer in me will quietly ignore that it might not be realistic for a player to consistently exhibit such an unusual skill. I’ve seen Pablo dig out pitches that almost bounce in the dirt. I’ve seen him tomahawk fastballs at his eyes. He did it for a year-and-a-half, and he did it all throughout April of this year. Maybe I’m a moron – more so than previously established, even – but I think that player still exists. He showed up last night.

It would have been hard to imagine a postseason run without Pablo Sandoval contributing in some fashion. Now we won’t have to. Maybe I’m a moron, but I’m not the only one.