Post-post-game Thread: The Giants have still advanced to the NLCS

Share All sharing options for: Post-post-game Thread: The Giants have still advanced to the NLCS

I’m trying to think of a happy ending to the Bumgarner-lost-his-velocity story, but I really can’t. Not in the short-term, at least. Maybe Beau Mills is still available.

Half tongue-in-cheek, half legitimate panic. Obviously, we all saw this moment coming. Madison Bumgarner throwing 94-mph darts in a series-clinching playoff game.

Against right-hander Adam Wainwright, Eugenio Velez is once again in the top slot and Schierholtz is still hitting eighth, with John Bowker on the bench. Discuss.

You can set the demarcation line wherever you want. I’ll pick this: 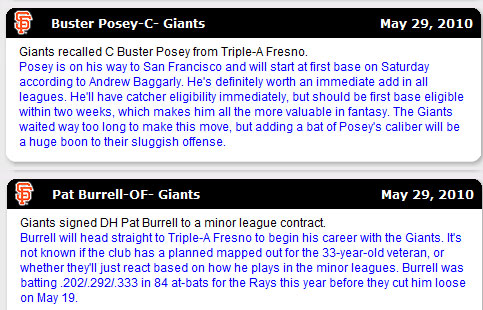 May 29th. Buster up, Burrell in the wings. There were other very, very important moves, of course. Even though there’s a lot of postseason left, I think it’s already appropriate to eat some crow flavored with sprinkled Bowker when it comes to Javier Lopez. Cody Ross was just supposed to be kept away from the Padres, and now he’s the biggest offensive hero of the series. But May 29th was when the 2009 Giants became the 2010 Giants, who are going to the National League Championship Series, by the way.

The Giants are four wins from the World Series.

If those people back in April only knew. It’s just a little hard to believe.