Post-Game Recap: The Giants Are Out of This Thing, and Running Down the Street To Avoid the Thing's Flaming Wreckage

Share All sharing options for: Post-Game Recap: The Giants Are Out of This Thing, and Running Down the Street To Avoid the Thing's Flaming Wreckage

The Rockies have 15 games left, and they lead the Giants by 3.5 games The Giants have 16 games left. Here's something to cheer you up: 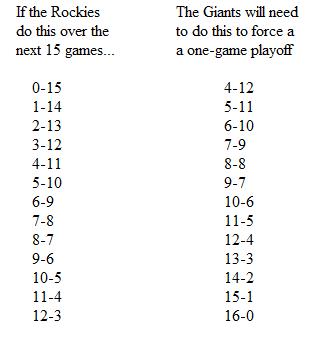 Which scenario seems likely? The Rockies mess the bed, and the Giants sneak in playing the same ol' way they've been playing all season? The Rockies do well enough, but the Giants go nutty over the last two weeks and steam into the playoffs with pockets full of momentum? Yeah. This should be awesome.

Don't forget Pascual Perez's Wager from last night, though. This loss doesn't sting nearly as bad as it should*. This is a team with a flawed roster, managed by a guy who has found a way to make it worse. He took the rusty bicycle he was given, and decided that square tires would make for a smoother ride. There's no way this team should sniff the playoffs with this offense and this manager. It would be a historically bad postseason team at the plate.

Now, as I'm writing this, the Giants are mounting a furious rally. Bengie Molina just knocked in a run. Juan Uribe represents the tying run. The Rockies are bringing in Rafael Betancourt, a right-handed reliever. If Bochy allows Edgar Renteria to hit -- if he doesn't recognize that, inspiring grand slam notwithstanding, Renteria is one of the worst hitters in the National League, he's hurting, and the Giants have left-handed power...

...I stopped writing when Uribe hit into the almost double play. Watched the last three outs with my hands half-over my eyes. Three chances to get a single. Two of the ten worst hitters in the league. To be fair to Winn, he's a much better hitter left-handed, but, brother, that doesn't mean he's good. Schierholtz had some good takes, but he was overmatched. The team was overmatched tonight.

And Edgar Renteria got his ninth-inning at-bat against a right-handed pitcher. Hey, it was the same pitcher that Renteria hit the Grand Slam against, right? That must have some sort of significance, right? No reason to use the best hitter in AAA. No reason to use Winn right there, either. Nope, save Winn to hit for Rowand, who isn't doing so hot this year, but who's a wee bit better of a bet than a gimpy Edgar Renteria.

I hate synecdoche games. I really do.

As my head hits the pillow tonight, the only thing that will let me sleep is my hope that an also-ran Giants team will lead to a new manager in 2010. All I want is a manager who can judge talent on something other than whatever 50 at-bats happen to stick in his head.

They fought hard. Kind of proud of them. But right now Bruce Bochy's talking about Edgar Renteria's clutchitude. That's like watching the Secretary of Defense get excited about new trebuchets after watching Washington D.C. burn. I've never disliked a manager more. Search the archives for "Felipe Alou." I'll guess there's, oh, twenty mentions over a couple of years. I didn't think managers could ever make much of a difference, but I've never watched a manager so clueless as to what constitutes a talented hitter.

*obviously, this sentence was written before the ninth inning