Nine games. Six against the Dodgers, three against the Rockies. If the Giants are going to win a playoff spot, they'll have to go absolutely nuts during this nine-game stretch. They're 4.5 games back from the Rockies, and 6.5 back from the Dodgers. If the Giants are going to shock the world and realize their 5% chance of making the playoffs, they'll have to win at least seven of these games. Maybe eight. Heck, all of them.

So while it's tempting to skip down the same optimism-paved path that Baseball Prospectus is on -- a 5% chance? Is this a Frank Capra movie? -- I'm starting to think the chances aren't so hot. The Rockies just went on a similar tear, winning nine of ten on their homestand, but that's because they cheat. My proof is this: teams usually lose. The Rockies don't lose. Therefore, the Rockies cheat. Hey, I'm not alone on this one: 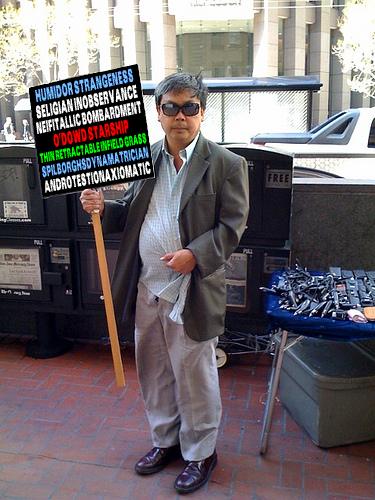 Color me pessimistic that we have to count on the Giants a) hitting enough to win, b) the Dodgers losing to not only the Giants, but to the Pirates and Nationals later in the month, and/or c) the Rockies losing ever again. If the Giants were to sweep the Rockies again, I would fully expect to look up at the out-of-town scoreboard and see that the Rockies had won. Don't ask how, just know that it's true.

But if the Giants were to go on a once-in-a-generation romp through the next nine games, it would be the stuff of rock operas, marble statues, and commemorative Burger King cups. A home and road sweep of the Dodgers would be indescribably legendary. Forget Joe Morgan -- heck, forget Brian Johnson -- the Giants causing an impossible regular-season Dodgers collapse that also leads to an impossible Giants playoff berth would lead to absolute deliriousness on a scale I can't even imagine.

So let's just sit back and expect it to happen.

Seriously, though, it's the only thing we have going. It's almost nice to have this low-pressure stretch, and make no mistake, it really should be free from pressure. There isn't a rational being who could predict that the Giants are likely to win seven, eight, or nine games out of the next nine. When the Giants drop a couple, hey, that's what we were expecting. The season really ended when they couldn't hit in Milwaukee or Philadelphia. The head-against-the-desk offensive failings numbed me like a Novocaine shot to the brain. So if the Giants want to become the stuff of legends, if they want to make 2009 something second in Giants lore to the absolutely insane run from 1951 (37-7 over the last 44 games!), they're welcome to do so. I'll watch. I'll listen.

I'm not expecting anything, though. And that's kind of nice for a change. It's been a long season.

Waldis Joaquin will get tossed into high-leverage situations. He's a rookie, and rookies can handle the pressure of a playoff chase. Unless they catch, of course, in which case they should have a 15-year apprenticeship before starting a game. I have a feeling I'll be grumbling about this one until we get a new manager.

Soaring indifference, or the kind of jubilation that will make you want to set cars on fire downtown. It should be fun, unless it isn't.