What if Manny Burriss played for Dusty Baker? Good kid, plays the game the right way, solid defense, can steal bases...is there any doubt that Burriss would still be in the lineup? Wait, that's not fair. You know, Baker gets a bad rap. Just because he favored speedy offensive goofs in the past doesn't mean he's incapable of change. If he were managing Burriss, I'm sure that even Baker would have made a change to g...

The Reds are having one of those unfortunate "if only" seasons. As in, "if only we had this league average pitching staff and above-average bullpen AT ANY FREAKING POINT OVER THE PAST SIX YEARS WHEN WE WERE SCORING 800+ RUNS EVERY SEASON." So I feel for them. Every team has a bunch of similar stories -- gee, if only we could ship Brian Wilson and Jeremy Affeldt to 2004 and have them lock Matt Herges and Wayne Franklin in a utility closet-- but it's rough when a team's been waiting the better part of a decade for anything approximating average pitching, and now that they have it, the lineup is the worst it's been in a decade. 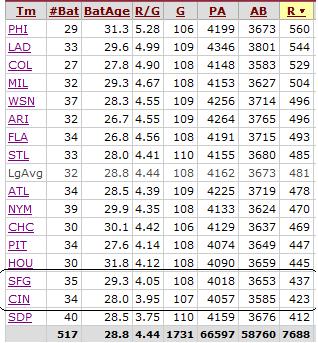 Fewer runs than the Giants, despite playing in a hitter's park. Good gravy.

The Scott Rolen trade was bizarre. He makes a frumpillion dollars, he's hurt a lot, and he was traded to a team that's struggling to stay ahead of the Pirates. If this were a sci-fi movie, the trade would be represented by a strange glowing orb found in the middle of an asteroid. Scientists would poke, prod, and probe it, but they'd be unable to figure out its purpose. Then it would grow arms and legs, shoot laser beams from its eyes, and destroy Tokyo. That's the Rolen trade. There's no earthly reason for him to be in San Francisco, playing the Giants, so he's obviously going to rise up and demolish us all.

If Rolen has ten hits in the series and drops an oh-fer against Colorado in September, I vow to never accept him as a Facebook friend. Word is bond.

Another hitter to watch might be Willy Taveras, who is guaranteed to get on base 17 times and steal 34 bases now that I've made fun of him. Sorry about that.

Aaron Harang is kind of my new white whale. He still has great peripherals and an above-average strikeout rate, but he gives up a lot of home runs and has an ugly won-loss record. So a cost-conscious team might not think he's worth the $12.5M next year (plus a $12.75 option with a $2M buyout). I'm not sure if the Reds can be described as "cost conscious" after the Rolen deal, but it isn't inconceivable that they'd want to move Harang to save some clams while not demanding a whole lot back.

With Randy Johnson's salary coming off the books, Harang would be an absolutely perfect fit in San Francisco next year. We wouldn't even lose any ground in Baseball Prospectus' Ugly Above Replacement Player rankings by swapping Johnson for Harang, which is pretty remarkable. So hopefully Harang loses a 1-0 game on Sunday and puts an idea in Brian Sabean's head.

PETT (People for the Ethical Treatment of Toothpicks) will protest every game, and I'll laugh at their hypocrisy. Like, it's okay to make a protest sign with a wooden handle to complain about how toothpicks are treated? What are toothpicks but little pieces of wood? How is that consistent at all? Look in the mirror, PETT. Look in the mirror.

Also, several toothpicks will met a wet demise in the opposing dugout. Welcome back, Dusty. If your team has the lead, make sure you give your starting pitcher the game ball before he walks off the mound.