Click this link. Do it. Don't mouse over like a weenie, find out where the link sends you, and then avoid it. Click the link, and let the horror wash over you. Wayne Franklin. Cody Ransom. Dustin Hermanson's sideburns. Unfortunate man-buzzard, Steve Finley. That was the last meaningful game played between the Giants and Dodgers.

That was the last meaningful game played between the Giants and Dodgers.

Well, every Giants/Dodgers game has a special kind of aura. When the Giants were on their way to 91 losses, I still did a dorky fist pump for every one of the 18 hits in the last game of the 2007 season. Why? Because suck it Dodgers. That's why. And it's hard to call a game meaningless when at least one of the teams is still in contention.

But other than those stray, Joe-Morgan-in-a-bottle hopes of schadenfreude, the Giants haven't gone into a Dodgers series with anything at stake since 2004. The mind boggles. Four years of sub-.500 nothingness. Four years of hoping Rajai Davis was the next Torii Hunter, or that Lance Niekro was the next, uh, Ron Coomer. I think I speak for everyone here when I suggest that this is the biggest series in the history of baseball.

An aside: if you haven't looked at Barry Bonds's numbers from 2004 in a while, they're good for a few laughs.

Not one of the Dodgers, that's for sure. When they're not taking drugs or eating veal right off the bone of a living calf, the Dodgers can hit a little bit. But I'm not going to single one of them out. The Dodger roster is an amorphous blob of dark matter, and I don't care if Manny Ramirez or Blake DeWitt is up -- I fear and loathe each of them equally. My Samoan lawyer concurs.

Also, I am of the opinion that the Giants should score some runs.

The Giants miss Clayton Kershaw -- though Bengie Molina just swung at one of Kershaw's sliders as I was typing this -- so they'll face Hiroki Kuroda, Randy Wolf, and Chad Billingsley. They all scare me in their own way. Kuroda and Wolf are finesse lefties who thrive on stupid hitting, and Chad Billingsley is a power rightie who can overmatch bad-to-average hitters. As long as the Giants keep the stupid, bad-to-average hitters out of the lineup, they'll be fine.

The pitcher to watch, though, is Jonathan Sanchez. Since coming back to the rotation, Sanchez has been pretty danged good.  After the no-hitter, he's had a few struggles staying in games, but his slider is a different pitch entirely. It's absolutely nasty right now, and if he can exhibit even a modicum of control, his results should match his stuff. I'd love for him to make some Dodger hitters look silly.

Or, he could walk seven in three innings, getting pulled after the game is out of reach. Don't want to hear the Sanchez-for-Joe-Carter rumors in the offseason, Jonathan? The no-hitter was a good start, but a fantastic stretch-run finish would mean even more.

I have a sack full of kittens, Giants. I have the number for Felines for Foster Kids, a non-profit organization that places kittens in loving homes. I also have a way to close the sack, and I also have access to the Pacific Ocean. What happens to the sack of kittens is up to you, Giants. Do not displease me.

Wait, that's more of a threat than a prediction. My prediction is that I'll look like Keith Richards after this series is over. I can't take this. 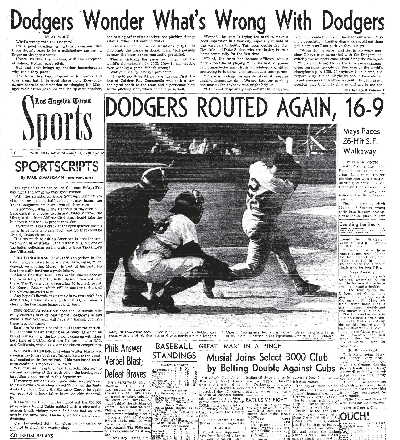