I took the Giants positional players from 1999-2009 and plotted their sOPS+ scores. A sOPS+ score of 100 for any position on this graph indicates that the player was an average hitter in regards to the position.

A quick note about this graph. The red horizontal line indicates a score of 100 or a league average hitter for that position. We are also counting total production for each position. So, it’s not just the starter at the position, but the total overall production line (starters, bench players, substitutions) from that position. And remember that we’re not really considering defensive value in today’s post. So, some players who aren’t necessarily great hitters might look a little worse than intended. A pretty good example of this is Omar Vizquel in 2007. He accounted for 85% of the SS production on that Giants team while putting up a 71 sOPS+. But, he was very good defensively that year and was worth around +2 wins as a total player. 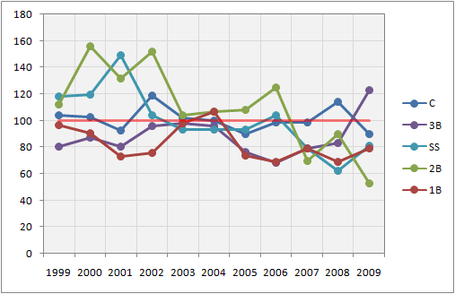 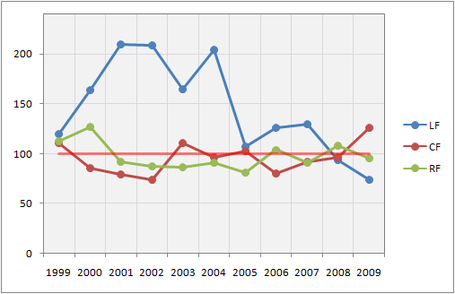