There's been a lot of talk around McC and other Giants sites about Fred Lewis. I was writing a little about Lewis today when I started to think out loud.

Something I wanted to work into the main article, but I didn’t was that in 2008, Fred Lewis hit an insane: .323/.320/.781 on flyballs. That’s good for a sOPS+ of 182. Fred hit 82% better than the league average hitter for flyballs. That’s just incredible. And not repeatable most likely for Lewis.

This year Fred is hitting .135/.135/.514 on flyballs. That’s an sOPS+ of 49. He’s under the league average for flyballs by 51%. That’s a huge hit for any batter to take. Combine that with his drop in BABIP and you’ve got a struggling hitter. Since most of his underlying numbers are the same, I would think that if his average on flyballs moves back towards league average or at least something respectable and than the current sOPS+ 49 that he’s dealing with, Lewis should see a bump in his offensive production.

Lewis won't post a 180 sOPS+ on flyballs going forward but he's just been getting killed lately when he's hitting the ball into the air. Anyone have any ideas as to why? Bad luck? And, does anyone have any good links for studies on this sort of thing? I'm looking to learn.

Here's a bad looking graph of Fred Lewis' sOPS+ for groundballs, flyballs, and liners from 2007-2009 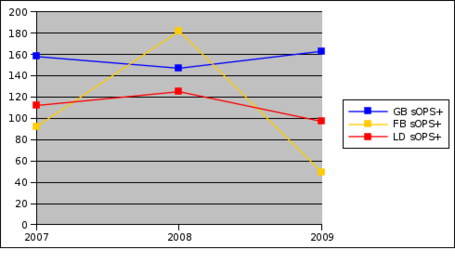 Everything looks pretty similar except for the extreme drop off in flyball sOPS+.

Any ideas why? Also, please don't turn this into a FRED LEWIS STINKS thread. I'll send jponry after you.