If you had any interest in Andy Marte, you've probably already visited this FanShot, which means that there really isn't a need for a front-page post on him. But you know what? I think in all fairness, I should tell you exactly what it is that I do. For instance, in the morning, I'll get up and write a blog post. And if Andy Marte is on the open market, I'll write about him. And just about the time when you've forgotten about how boring a subject Andy Marte is, I'll be ready to write again. And guess what? I'll blog about Andy Marte again. Because I'm stupid.

Marte is indeed a great white whale around these parts, as he fits the script. Young, bedraggled former prospect, almost out of a job, suddenly rises! up and uses his natural tools to become a good player. I'd buy that book. Every team has a story like this. Carlos Pena, Jorge Cantu, Ryan Ludwick...the list goes on and on. It certainly didn't stop there because I couldn't think of any more. Marte's career, briefly:

Age 20: Same as the above, but this time in AA before he can legally drink. Top-ten prospect.

Age 21: Same as the above, fewer strikeouts, now in AAA. Top-five prospect.

Age 22: Loses a tooth, puts it under his pillow. The receptionist at fairy dispatch accidentally gives his work order to the Suck Fairy, who sprinkles Marte liberally with suck dust.

Age 23: Aah...aaah...choo! That suck dust really gets everywhere, doesn't it?

Age 24: Jose Castillo called and offered to loan some of his remaning promise to Marte. What a selfless gesture.

The Giants are linked to Marte now. And by "linked," I mean, "a writer entered 'teams looking for a third baseman' into Google five minutes before his deadline." The article does give us a Photoshop-ready picture/caption combo, though: 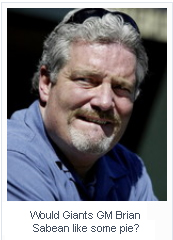 I mean, c'mon. That's the face of a man who was just informed that pie was available. You've made that same face in the past week, I'm sure.

The problem with the Marte idea is that the Giants aren't hopeless. Last year? Sure, bring in Jose Castillo. Throw Dan Ortmeier at first. Take wild, unlikely chances. The team wasn't going anywhere, so the Giants should have tried to find their own Carlos Pena. This year? It isn't as if the Giants are top contenders, but they have a fair shot at .500. And a team with a fair shot at .500 is a team with a fluke's chance at 85-88 wins. And a team with 85-88 wins might sniff the playoffs. The difference between the making the postseason or not might be 300 awful at-bats from a reclamation project like Marte.

But is isn't as if the alternatives are that appealing, either. Acquiring a corner infielder at this point probably means fewer at-bats from Travis Ishikawa, who is a bit of a reclamation project in his own right. Even though Ishikawa had a very nice season last year, I'd take my chances with Marte first. Marte's the same age, but he has always been more highly regarded. Add in Marte's ability to play third, and I don't see a point in Ishikawa's favor other than familiarity. That, and the fact that Ishikawa has been productive as recently as last season, which is no small point.

I'm satisfied with the roster right now, but I would still take a chance on Marte. I know I'm in the minority, and I know he's likely to flop. I know it's unlikely that the Giants would keep Marte, but if he really starts to hit in the spring, it isn't as if Rich Aurilia's contract is guaranteed. There's no reason to commit to Marte; luckily, there's no need to. Low risk, high reward. I'm in.