RBI: 3rd (That’s a little misleading, as Rogers Hornsby’s total is one that combines each Roger, but it’s still elite company.)

I think at one time or another, we’ve all rooted for Kent to catch his moustache in a wheat thresher. Just to give a little context, Michael Jordan appeared on the cover of Sports Illustrated 49 times. Jeff Kent appeared on the cover of Raging Jackass Quarterly 78 times, even more if you want to include the swimsuit editions, which we certainly don’t. But Kent is a Hall-of-Famer. Please refer to my handy flowchart if you disagree: 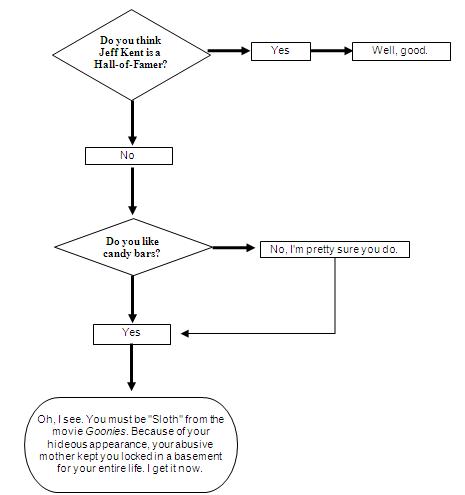 Here’s a comparison between Kent and Player X. Try and guess the identity of the mystery player:

Player X is Orlando Cepeda. Basically, Kent hit like Orlando Cepeda, but played second base. THAT IS INSANELY VALUABLE. If you don’t think such a player is a Hall-of-Famer, the rest of the world can only hope that you are sterile. Kent was an above-average hitter in every season of his career, with the possible exception of last season. His defense was pretty bad for his last few seasons, but he was an average defender for most of his career.

Does he compare favorably with Rogers Hornsby, Joe Morgan, or Nap Lajoie? Of course not. Does he compare favorably with Ryne Sandberg, Tony Lazzeri, Bobby Doerr, Frankie Frisch, Charlie Gehringer, Billy Herman, or Red Schoendienst? Absolutely. Whatever argument you could make for the above players over Kent – say, that the player in question was a superior defender – is an argument that could be deflected by Kent’s superior offense.

I don’t like the guy off the field, but I’ll remember him as a good Giant. One of the best. And to think that he’s getting the "Gee whiz, is this guy a Hall-of-Famer?"-treatment makes me seeth. For 11 straight seasons, Kent was one of the very best second basemen in baseball, and he was healthy for most of those seasons (only once did he play fewer than 130 games).

I don’t care if he doesn’t "feel" like a Hall-of-Famer to you. I don’t care if when he played, you never thought "there’s a Hall-of-Famer." This isn’t about you and your broken memory. Dig into the history of baseball. Make a list of the second basemen who were clearly better than Kent. It’s a short list.

Also, I believe Jeff Kent should be inducted into the Hall of Fame.