Brian Sabean and the Case of the Positive Acquisitions

Share All sharing options for: Brian Sabean and the Case of the Positive Acquisitions 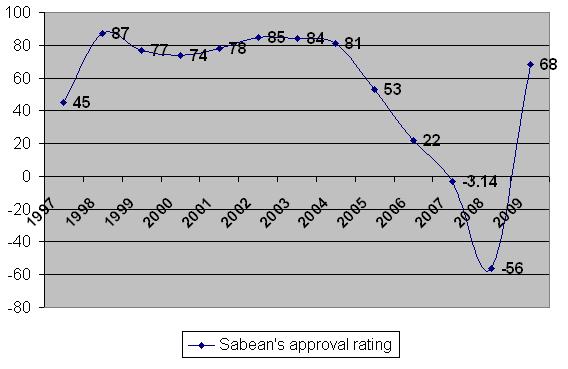 Up, down, way down, and now back up a little bit. I haven't always been against Brian Sabean's wacky ways. Sure, there was a time when I wondered how much of the Giants' success was due to Bonds, and how much was due to Sabean, but when the Giants were winning, I was mostly grumbling about minor stuff. Jacob Cruz and Steve Reed for Jose Mesa made me foam at the mouth. In retrospect, that was a deal that just wasn't that important compared to the overall construction of the roster, which was pretty solid. The approval ratings have fluctuated pretty wildly.

Throughout this period, though, one aspect of Sabean's roster-building that received consistently high marks was his willingness to pick up minor league free agent and waiver wire relievers to stash in Fresno. A quick jotting that is by no means all-inclusive:

OK, that isn't all that impressive -- most teams should have a similar list of free relievers over a ten-year span -- but it doesn't include the solid gambles like Brandon Villafuerte, Kevin Walker, Jeremy Fikac, Brandon Puffer, and Scott Atchison who didn't pan out. Those were guys with a track record of striking AAA hitters out, and even if they didn't set the National League on fire, they were no-risk/high-reward acquisitions. This year's candidates are Justin Miller and Brandon Medders; I don't expect to see either much this year, but either one might be able to help a big league bullpen.

Hey, have I ever mentioned that I like this strategy? Let's see...do a quick site search for Brandon Puffer...and...oh, my. I guess I bring this up once every six months. At least I was due. And didn't Puffer get arrest for pulling a knife on a rickshaw driver, or something like that? I guess that isn't really relevant to this post.

But this is an open thread to damn with faint praise. Even when I had the least amount of confidence in Brian Sabean, there was at least one aspect of his philosophy that I liked. So the comment starter is this: Even when your confidence in Brian Sabean has been at its lowest point, has there been something about him that you liked? Serious answers and silly answers are, of course, both welcome.

Before you answer that though, I'd like to comment on the Andres Torres signing. Finally, Sabean does something worth applauding this offseason. Torres is one of the best kept secrets in professional baseball. He has gap power, and he might be the fastest player on the team already. His defense in center is Gold Glove caliber. He’ll be used as a spare outfielder, but it won’t be long until he fights his way to a starting job. When he does eventually make it, he’ll be one of the best leadoff hitters in the league.

So good job, Brian. And please note that I did not add that last paragraph in on June 17th, 2010 to make myself look smarter. For that would be shameful. The paragraph was always there, and I knew Torres was going to be this good the whole time.