Weighing in on the Big Move

Share All sharing options for: Weighing in on the Big Move

Jose Castillo has a career on-base percentage under .300. In his best season (2005), he was a warmed-over Pedro Feliz minus the defense. He doesn't walk, he has middling power, and his minor-league stats were never especially impressive at any level. And I love that the Giants picked him up. For clarification, please check in with the Joe Crede trade threat advisory system: 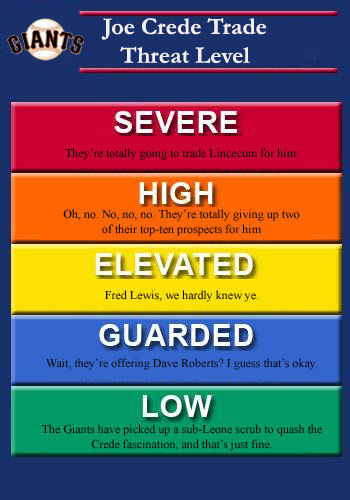 Beautiful. Jose Castillo has about a 4% chance of ever helping the Giants win any sort of playoff spot. Joe Crede would have a -2% chance of ever doing the same. The math has it. In a system that is barren of any sort of cost-controlled youth, Jose Castillo represents a welcome stab in the dark. He used to be a good prospect, albeit one who was rushed more than his performance should have dictated. If you squint, that 2005 season can look like a season that hinted at something more. Toolsy middle infielders with 15-homer power aren't that common. After last call in the Optimism Tavern, you'll go home with just about anything.

The best argument against a 4%-solution like Castillo is that he might take at-bats from players like Kevin Frandsen and Eugenio Velez. It's a fair point, but it assumes that Frandsen and Velez are superior prospects. Frandsen has much better contact numbers than Castillo, but he can't offer the same power. Velez, for all of his spidery glory, has a single low-A season at the age of 24 as the main bullet point on his resume. Castillo might be the lesser of the three, but it isn't a landslide.

It's an ugly situation. Castillo probably won't help. But he has a good chance at leading the team in not being Joe Crede. We'll always be eternally grateful to him for that. Between Castillo, Frandsen, and Velez, maybe the Giants can squeeze out a starting second baseman for the next four years. The organization definitely has the time to sort that all out this year. One more warm body can only help the odds.