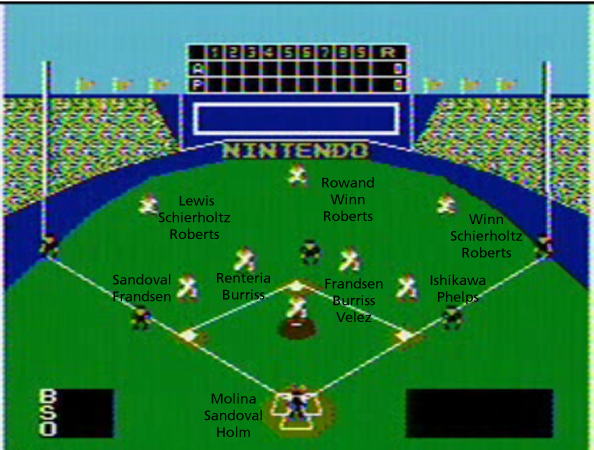 Assuming that the Giants go with the usual twelve-man pitching staff, there will be thirteen open spots for position players on the 25-man roster. There are seven guaranteed spots going to Winn, Rowand, Renteria, Sandoval, Lewis, Schierholtz (out of options), and Molina. That leaves six spots for these players:

Okay, so the Giants go with Sandoval as the primary backup catcher, and Holm goes down. It fits so nicely. Now, I would prefer that the Giants send Burriss down to AAA and sign a generic backup for shortstop, but I doubt that's going to happen. So, here it is. Barring any unforeseen changes, this is the depth chart for the 2009.

Except there are a couple of problems. There's no way that the Giants will go into the season with the same player as the starting third baseman and sole backup catcher. So put Steve Holm back on there. And that roster has a combined career total of 22 games at third base, which is a total that includes Randy Winn. So the Giants aren't done adding. They'll probably want a right-handed hitting infielder with experience at third. Okay, so going down the free-agent list...uh...that guy's signed...that guy's signed...and that guy's Rich Aurilia.

The Giants will re-sign Rich Aurilia. It would actually be a decent move if I knew that Bochy would use him correctly, but somehow I figure Aurilia for 350-400 at-bats, with about 2/3rds of the at-bats coming against right-handed pitchers. That was the pattern last year, and I don't see why it would be different in 2009. But that's a complaint for another time. If the Giants keep another catcher and add an Aurilia-type player, they'll need to drop two players from that list.

Burriss can't go unless he's replaced with another shortstop. The Giants aren't just going to eat Roberts's contract. Ishikawa is likely going to be the starter. Either Frandsen or Velez will get substantial at-bats at second. The other will be a utility player. If the Giants do add an Aurilia-type player and keep a third catcher, one of Frandsen or Velez won't even be with the team.

Conclusion: Josh Phelps has no shot to make this roster. He's the only player on the entire roster with 25+ homer power, depending on which Aaron Rowand shows up, and he complements perfectly Ishikawa's platoon deficiencies. Phelps has experience in the outfield and, heck, in an emergency, he can also play catcher. The Giants' signing of Phelps was a nice move to improve the team for cheap. But we'll get to see Dave Roberts instead. It doesn't matter that Roberts is only a corner outfielder now. It doesn't matter that he has no power, or that he's the fourth left-handed hitting outfielder on the roster. Roberts is untradable, and the Giants aren't going to release him before the season starts.

I've made about fifteen different assumptions to get to this point, so I'd like to know if I fouled up along the way. But right now, I'm setting the over/under for Josh Phelps's home run total in Fresno at 25.