The San Francisco Giants and Rumor-Monging

Share All sharing options for: The San Francisco Giants and Rumor-Monging

The lower walk rate and lower home runs allowed rate might tip the scales in favor of B. Park effects aren’t included in this, and those would probably tip the scales a little bit further in B’s direction. Still, pretty even, right? There’s one more piece of information, though:

Woof. Player A is Kevin Correia, and Player B is Jason Marquis, with whom the Giants were linked in a recent Ken Rosenthal column. It was a vague mention of casual interest rather than a hot, hot, hot tip, but as far as rumors go, it makes sense.

This isn’t to suggest that the Giants were foolish to let Correia go – Correia’s peak will always be that of a back-of-the-rotation guy. There is some evidence that Correia was unlucky last year, but while that 6.05 ERA probably doesn’t reflect Correia’s true ability, it would be optimistic to expect anything below, say, a 5.00 ERA.

And this isn’t to suggest that Correia is interchangeable with Marquis. Not exactly. Other than 2006, Marquis has been a reliably average starter. He’s pitched close to 200 innings for the past five years. If I had to choose just one for a rotation spot, all things being equal, I’d choose Marquis. All things are not equal, though. Marquis is overpaid. Correia, if he returned to the pitcher he was before last season, would be a relative bargain. The risk of counting on Correia to rebound is worth the extra $6M, I would think.

If the Cubs throw in some salary, and the Giants don’t give up anything more than a Darren Ford-type player, I wouldn’t mind a deal for Marquis. I’ll just wonder why they didn’t try Kevin Correia one last time. Because when I wrote that the Giants should sign a free-agent starter, I was hoping for someone who would only cost money. Marquis fits the profile of what I was looking for – an innings eater with about a 1% chance of going Kyle Loshe on the world – but I’m terrified that Brian Sabean looks at Marquis’s Baseball-Reference page, and sees something like this: 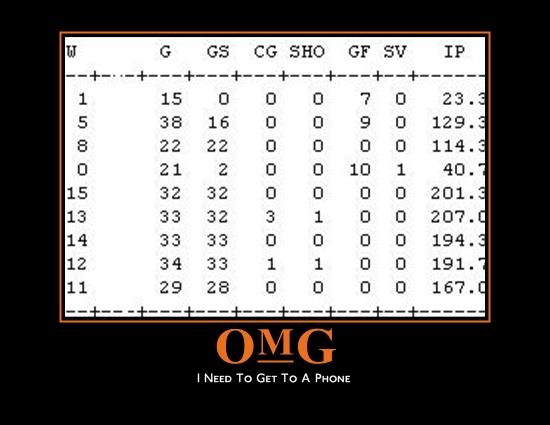 Because if anything of value is needed to trade for Jason Marquis, the Giants should stay away. For a non-prospect? He’s a piece of advent-calendar chocolate. Slightly chalky, probably around since 2000, but not the worst thing in the world. For an actual, honest-to-goodness, potential piece of the future? Marquis is a piece of black licorice covered in fire ants at the bottom of a latrine.

Thus concludes today’s Overreaction to Stray Rumor Theatre. We would like to thank our sponsor – Mutual of Omaha – and we would also like to thank readers like you.